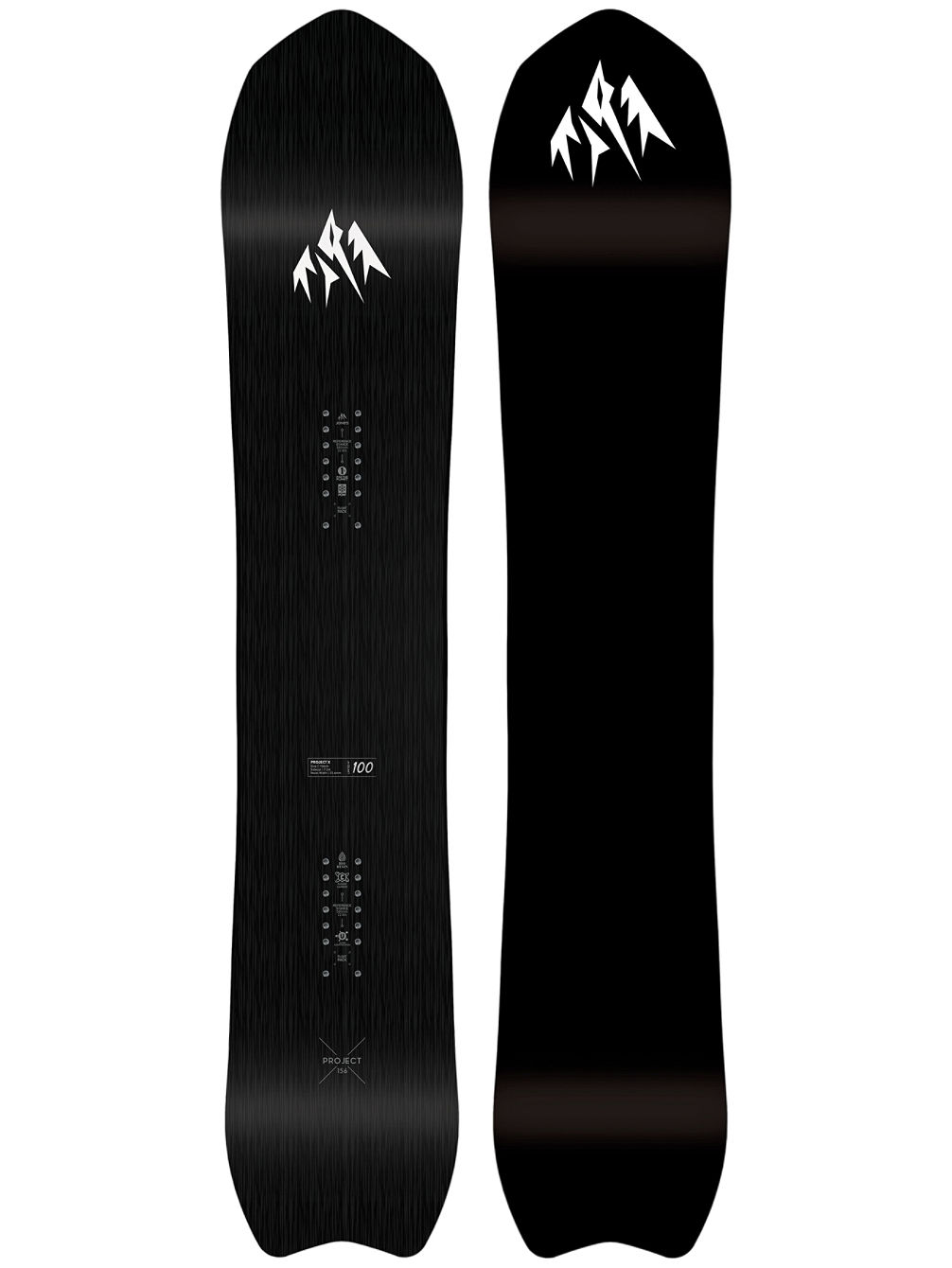 Starting the new season with a new shape and new technologies

The Project X has always been a very special Jones snowboard. But this year Jones has added another shovel to the mix: a new shape and the new Fusion Carbon construction give the board that certain extra. Of course, only high-end materials are used for a snowboard experience that is absolutely unrivalled.

Riding Style
Ride it all - with this all-mountain weapon you can charge everywhere.

Shape
The Project X has a new shape: The Tapered Directional Shape increases float and stability at speed. Directional is the classic snowboard shape, designed to be ridden with a slightly longer nose than tail to concentrate pop in the tail while still giving you plenty of float, flow, and control to rip any terrain and condition. A tapered shape means the nose is wider than the tail, this enhances deep snow flotation. In deep snow, the Blunt Nose makes sure that less snow comes over the sides of your nose, as that would obviously slow you down. This also means you get the benefits of a longer traditional nose, without the extra weight. Edges like a serrated knife slicing into the snow, Traction Tech 3.0 improves your edge grip by adding multiple contact points along the running length of your board. At the far ends of the Progressive Sidecut, the radius is incrementally increased as the edge reaches the contact point. Gradually increasing the sidecut radius towards the contact point delivers smoother turn initiation and exit as the edge tracks in and out of the snow with a less abrupt transition.

Profile
The Directional Rocker profile has an under-foot camber with a larger rocker area in the nose than in the tail. The float of the rockered nose improves manoeuvrability while the camber underfoot provides edge hold and response. The slightly rockered tail maintains power and stability but helps to keep the tail catch-free when initiating turns and landing switch.
The 3D Base Contour 3.0, a freeride focused 3D-base contour featuring an even balance of 7mm of spoon bevel in the nose and 7mm of spoon bevel in the tail, floatation is guaranteed.

Flex
The Project X has a mid-firm flex. This gun has a very accurate response and can stomp bigger airs than humanly possible.

Construction
The Ultra Construction puts materials exactly where they are needed while eliminating all excess materials. Jones Ultra boards are the lightest, yet most durable snowboards on earth.
The new FCS™ Fusion Core is Jones’ lightest wood core yet. The core is made from mostly paulownia with specifically positioned pockets of poplar for improved durability and response. The Fusion Tech construction reduces board weight and improves durability by combining board materials in two stages. Multiple layers of aerospace-grade carbon fibre and a wood core are fused by using little epoxy. After curing, these internal board layers are then pressed in between a base and topsheet, using little epoxy. Fibreglass Reinforcement is a fibreglass layer to improve pop in nose and tail plus increases the longevity of the flex profile.
The Sintered Ultra Base is Jones best base, setting new performance standards. The ECO-Plastic Topsheet is made from Castor beans. This eco-material is ultralight, chip/scratch resistant and water/snow repellent (snow sticks less to topsheet). Thinner 2mm edges on the Project X to save weight. The Rubber edge dampening and ABS Sidewall material is made of 100 % recycled material. Float Pack Inserts allows super setback stance for deep pow days.

"Snowboarding is not my job, it’s my life". Jones Snowboard founder Jeremy Jones explains so much in so few words. He wanted to create the ultimate snowboarding gear that lived up to even the highest standards, and he has done exactly that. The company prides itself on giving back to the wild places they so dearly cherish through actions such as 1% For the Planet. There is nothing we don't love about Jeremy Jones and his vision.