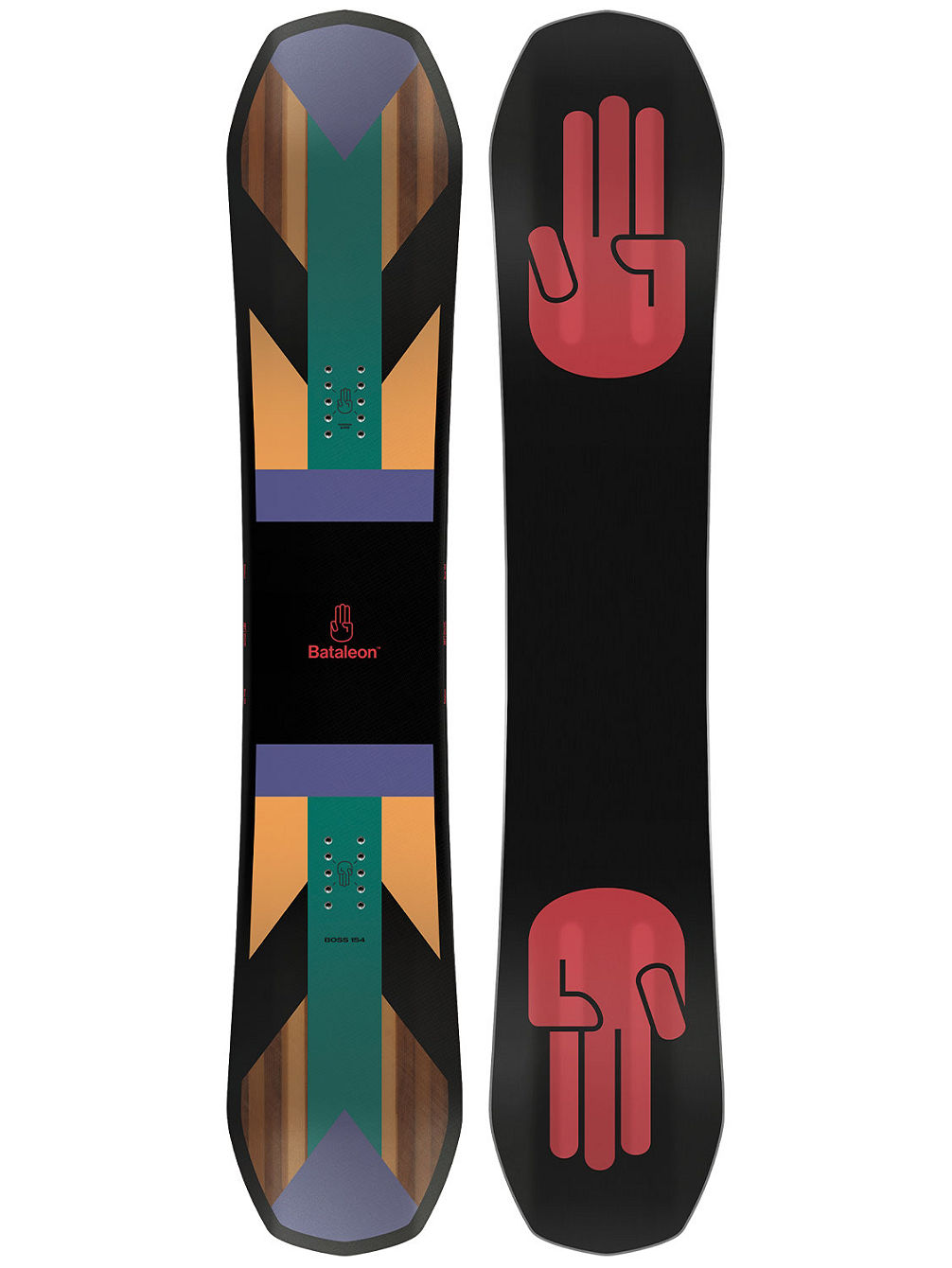 Built on the basis of Bataleon's most popular Evil Twin, the Boss is packed with only the best ingredients. Just the finest core, layups, additives gathered in one board for big ollies, big landings, big control. Not just for the park, but also pretty sweet on backcountry booters. In brief, it rides like a boss!

Riding Style
Originally created for hardcore freestyle riding in the park, the Boss just rules everything. You will feel its bossy response and stability even in a powder kicker session.

Shape
In the park, there's only one true shape and that's the true twin. The Boss, of course, comes with a Twin 3BT shape with a symmetrical tip and tail. Balance and stability no matter which direction you take off or land. The new SideKick Tips increase the edge uplift on the widest points of nose and tail for easier turn initiation, more float and better handling in rough terrain.

Profile
The Twin 3BT consists of a relatively wide centre base and just a mellow side base uplift. This helps you keep control on presses and at high speed. The dynamic camber is perfectly dosed for flexible rail riding and poppy enough for hitting kickers.

Flex
The hardest flex (5/10) among the twin boards is nothing for sissies, it's meant for real men. Massive pop for massive airtime.

Construction
The Super Ultra Light Core is the lightest 80-20 Swiss paulownia and poplar wood blend for the lightest strength to weight ratio. C.S.T, Central Super Tube wood core upgrade has one centrally placed hollow carbon rod milled into the bottom of the core to enhance pop without stiffening the board torsionally. The sintered Ultra Glide S base is hard and fast, but wax it good! The AirRide™ core additive dampens vibrations and makes riding smoother at high speeds. It’s like having a suspension system in your snowboard.

When you think of snowboarding, usually snow and mountains spring to mind. Yet Bataleon snowboards, some of the best boards around, stem from Amsterdam. With their patented 3 base technology, Bataleon have won over happy-go-lucky snowboarders from all corners of the earth. Better, smoother, faster and lighter rides are what await you with any Bataleon weapon of choice.